We're temporarily closed, but we look forward to seeing you online at MOS at Home. 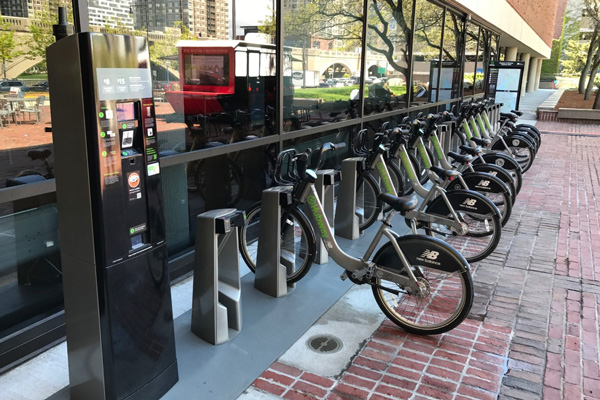 Getting to and from the Museum — and the rest of the city — just got easier, and more fun! Blue Bikes, metro Boston’s bicycle-sharing system, is now available on the front plaza of the Museum near the front entrance.

Blue Bikes is a regional partnership between Boston, Brookline, Cambridge, and Somerville. For more information: bluebikes.com.

The Museum of Science is committed to environmental sustainability.

Science Park station is currently being served by MBTA shuttle buses. These are replacing E Branch service between North Station and Lechmere until Spring 2021 to allow for work on the Green Line Extension and the Lechmere Viaduct Rehabilitation Project. Should you arrive via MBTA shuttle bus, the Museum will be diagonally across the street (O'Brien Highway), just over the Charles River Dam draw bridge.

To transfer to the Green Line from other lines

If you are transferring to the Green Line from other lines, take:

To walk from other lines

If you plan to walk to the Museum of Science from other lines, take:

The garage closes at 11pm from Sunday-Thursday, and 12am on Friday & Saturday

Please note: A state project on the Longfellow Bridge is rerouting traffic to O'Brien Highway in front of the Museum and may cause delays. Please visit the directions page for more information.

The Museum of Science garage now houses Level 2 electric vehicle charging stations capable of charging up to four cars simultaneously. The stations are located on the fourth floor of the garage—just follow directional signs to the designated charging area.

While there is no cost to charge your car, you will need a ChargePoint account to access. However, a fee of $5.00 per hour will be charged beginning 30 minutes after your car is fully charged if it is not moved. In addition, regular garage fees apply for parking. For more information: chargepoint.com.

The Museum of Science is committed to environmental sustainability.

Other parking options near the Museum include the CambridgeSide Galleria.

Please note that this garage is not affiliated with the Museum of Science, and the parking discount for Museum members applies only in the Museum garage.