Our garage elevators are currently out of service. We apologize for the inconvenience.
For assistance, please call 617-723-2500.
Tickets

How Did Bats Evolve Flight? 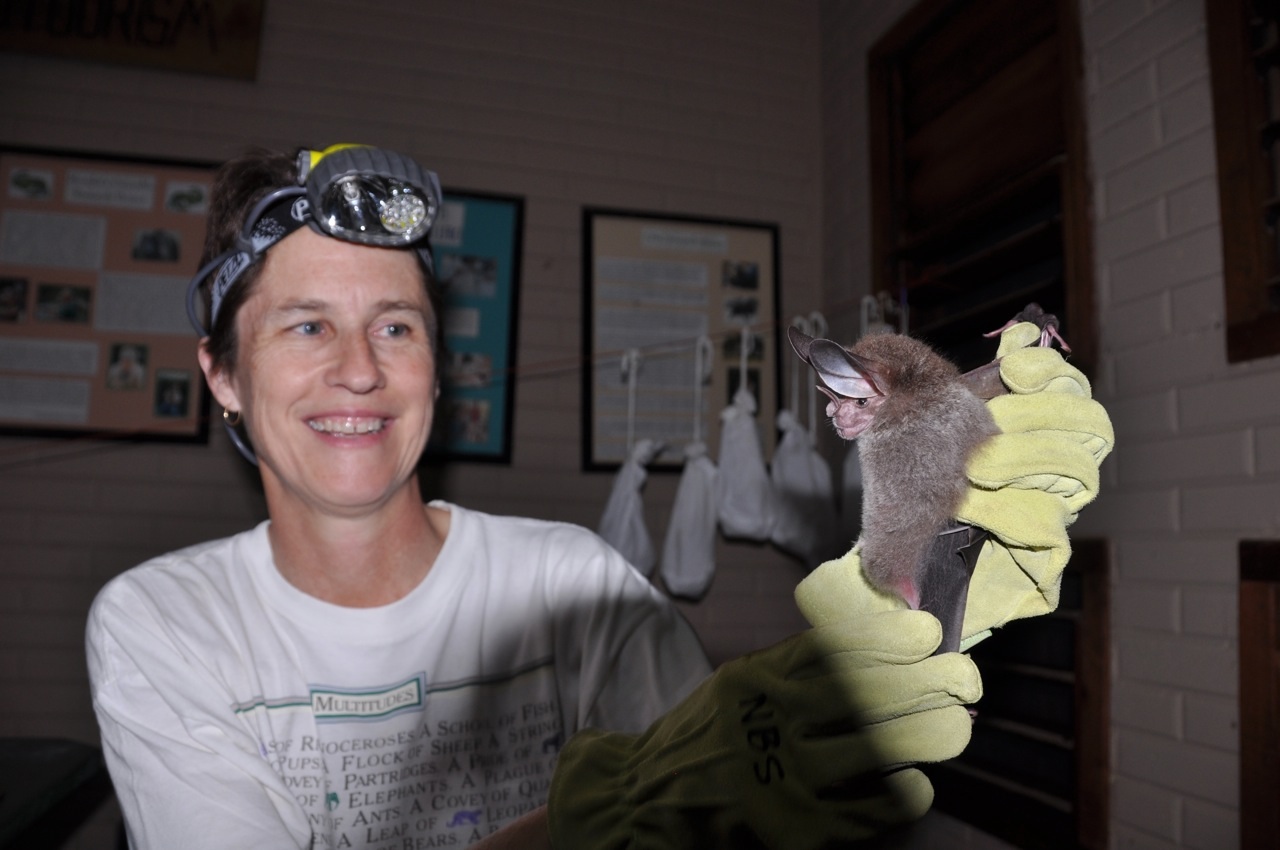 Bats are the only mammals in Earth's history to achieve powered flight. We ask evolutionary biologist Dr. Nancy Simmons how bats gained this ability and why.

This Pulsar podcast is brought to you by #MOSatHome. We ask questions submitted by listeners, so if you have a question you'd like us to ask an expert, send it to us at sciencequestions@mos.org.

Don’t miss an episode – subscribe to Pulsar on Apple Podcasts or Spotify today!

ERIC: From the Museum of Science in Boston, this is Pulsar, a podcast where we echolocate for answers to the most curious questions we've ever gotten from our visitors. Happy Halloween! I'm your host, Eric, and October's spooky season is a great time to talk about bats and their amazing story. They are the only mammals to ever develop powered flight. And our visitors want to know how and when bats acquired this amazing ability. My guest today is one of the world's leading experts on bats and their history, Dr. Nancy Simmons, a curator at the American Museum of Natural History in New York City. Dr. Simmons, thanks for joining me.

ERIC: So why don't we start with how long bats have been around. What's the earliest fossil we've ever found, where we can definitively say: that's a bat.

NANCY: So the oldest fossil bat is about 55 million years old. And it's a single tooth, which is kind of frustrating. A little bit younger than that we have entire fossil bats. So whole skeletons that are about 52.5 million years old. So we're talking about the Eocene period here. So after the end of the age of dinosaurs, but a long time ago.

ERIC: So when the dinosaurs were around, for a long time, mammals were kind of smaller, they're digging in the ground, and then it only took about 10 million years after most of the dinosaurs disappeared for bats to appear and start flying around?

NANCY: Yeah, so the ancestors of bats, we presume were probably small scrambling animals, they might have lived at the end of the age of dinosaurs. There's a gap of, as you said, about 10 million years between when we think the lineage leading to bats separated from other mammal lineages or other mammal families that were going off to evolve in their own trajectories. So we don't really know what happened in that time period, that 10 million year time period. It's still a mystery, because the first fossil bats that we find are clearly already bats. So they have the long fingers and hand bones that would have supported wings, they have the structure of their chest is kind of like ours. If you think of the way a dog is built, they're sort of narrow from side to side, and deep from top to bottom. So you just have your dog or your cat. But humans were compressed the other way, right, so we're sort of narrow from front to back, and bats are built like that. And it allows the structure of the arms and the chest to allow hanging behavior and pulling behavior in primates. So the way humans in our evolution, there was probably a period of time in which we were tree dwellers, ancestrally. In bats, this allows the wings to have great big chest muscles so that they can power wings for flight. We see those specializations in the skeleton right at the beginning of the bat fossil record. And we know they had to evolve over some period of time to get to that structure, but we just don't have any fossils. It's kind of frustrating, but maybe someday we will.

ERIC: It's interesting to think that we have some of the same adaptations for, you know, completely different things.

ERIC: I was gonna say, is it possible that bats started as climbers and maybe even gliders?

NANCY: Yes, so we think that the ancestors of bats originally were probably specialized for hanging under branches and gliding. There are animals today that are called flying lemurs. They don't fly for one thing, and they're not lemurs, the are a separate group of animals also called colugos. But they glide, they hang on trees and under branches with elongated arms and legs. And so most likely, the ancestors of bats also had some elongation of the limbs for climbing behavior. So that may be one of the steps on the way to gliding and then flight.

NANCY: Well, it's interesting. So in the dinosaur lineage, to which birds belong, so birds are basically flying dinosaurs. Flight in birds is thought to have evolved from the ground up. So the ancestors of birds are thought to have been running animals that evolved specializations of their their arms probably for trying to catch insects while running. We don't believe that for bats, because bats don't show any evidence of specialization in their legs before running. But they do have the structure of the chest and so on, which suggests they were climbers. And so we think bats evolved flight in sort of a different way, from up in the trees. So starting out as tree dwelling animals, which evolved gliding to get between trees and then evolve powered flight from that background.

ERIC: It's interesting to think that flight has evolved just that couple of times, where we have bats, we have birds, we have insects, but in completely completely different ways.

ERIC: So let's talk about why bats evolved the ability to fly. Can you start with gliding: what kind of advantages would that give a small mammal, to be able to glide from place to place?

NANCY: Gliding has evolved probably seven different times in different mammal groups. Imagine your'e a small scrambling animal climbing up in trees and chasing insects at night, and you want to be able to get from one tree to another tree without having to go down on the ground where predators might catch you. Gliding seems to be a really great thing to be able to do if you're a tree dwelling small animal, because that way you can get away and you can move between trees without having to go to the ground. That would be the initial advantage of starting down this pathway, basically.

ERIC: And from there, bats have been the only mammal to evolve from gliding to powered flying, actually flapping wings. So what further advantages would you get from being able to do that instead of just gliding?

NANCY: Well, a gliding animal has to climb up a tree, and then it launches itself and it uses its gliding membranes to basically ride airwaves. It tries to catch various updrafts of warm air and so on to go as far as it can go. But most often, its landing point is going to have to be below its takeoff point because gravity is going to pull you down. So you might catch a gust of wind and occasionally end up higher than you took off. But most of the time, you're going to end up going down, and then climb up again, right. And also, there are limits to how far you can go. A flying squirrel, which isn't actually flying, it's gliding. A flying squirrel can go between trees that are fairly close together. But it can't really go that far. Every time he wants to cover a long distance, it has to climb up and glide and then climb up another tree and then climb and climb up another tree and fly. So you can just thinking about that you say, wow, wouldn't it be great if you could stay up in the air longer, if you could keep going. And if you didn't want to stop at all those intermediate trees, you could just keep going across the landscape until you got to the tree you really wanted to be in. So the advantages of flapping flight are that it allows you to stay up in the air. The downside of that is it is really energetically expensive, because instead of just putting your arms out and just gliding down softly to your next landing point with no muscular energy, you have to power those wings to stay up in the air. And that requires a lot of energy, it requires big muscles, you have to have a high metabolic rate, you have to be able to get a lot of food to power those muscles and power that flight.

ERIC: So what would be kind of a jackpot fossil, getting back to the origins of bats, if there was one fossil from a time, or showing one thing that you could find, What would it be? Would it be something kind of halfway between?

NANCY: Well, there's a couple different things. I would love to find a really early fruit eating bat. So the oldest fossils of fruit bats or plant visiting bats in the new world are about 13 million years old. We do have some of the flying foxes. There's like a single tooth known from the Oligocene, but we have no idea what the rest of the bat look like. I would really like to see the rest of the bat and know what it was really like. Those are details of how these different lifestyles, different feeding habits evolved. At the very base of the bat tree, I would love to find a Paleocene bat. The group that became all of bats had ancestors that lived in the Paleocene for sure. But we don't know what they look like. It would be fabulous to find some intermediate between gliding mammals and fully flying bats.

ERIC: Hopefully someday. We're finding new fossils all the time, we get better technology, digging them out more, and preserving them analyzing them. So hopefully it's only a matter of time.

ERIC: That's part one with Dr. Nancy Simmons. Tune in next time for the conclusion to our conversation, where we explore the amazing diversity of living bats and talk about more of their unique abilities. Until next time, keep asking questions.

If you liked this episode, be sure to check out:

What Is the Fastest Animal?

What's the Difference Between a Turtle and a Tortoise?

Why Did Dinosaurs Have Feathers?