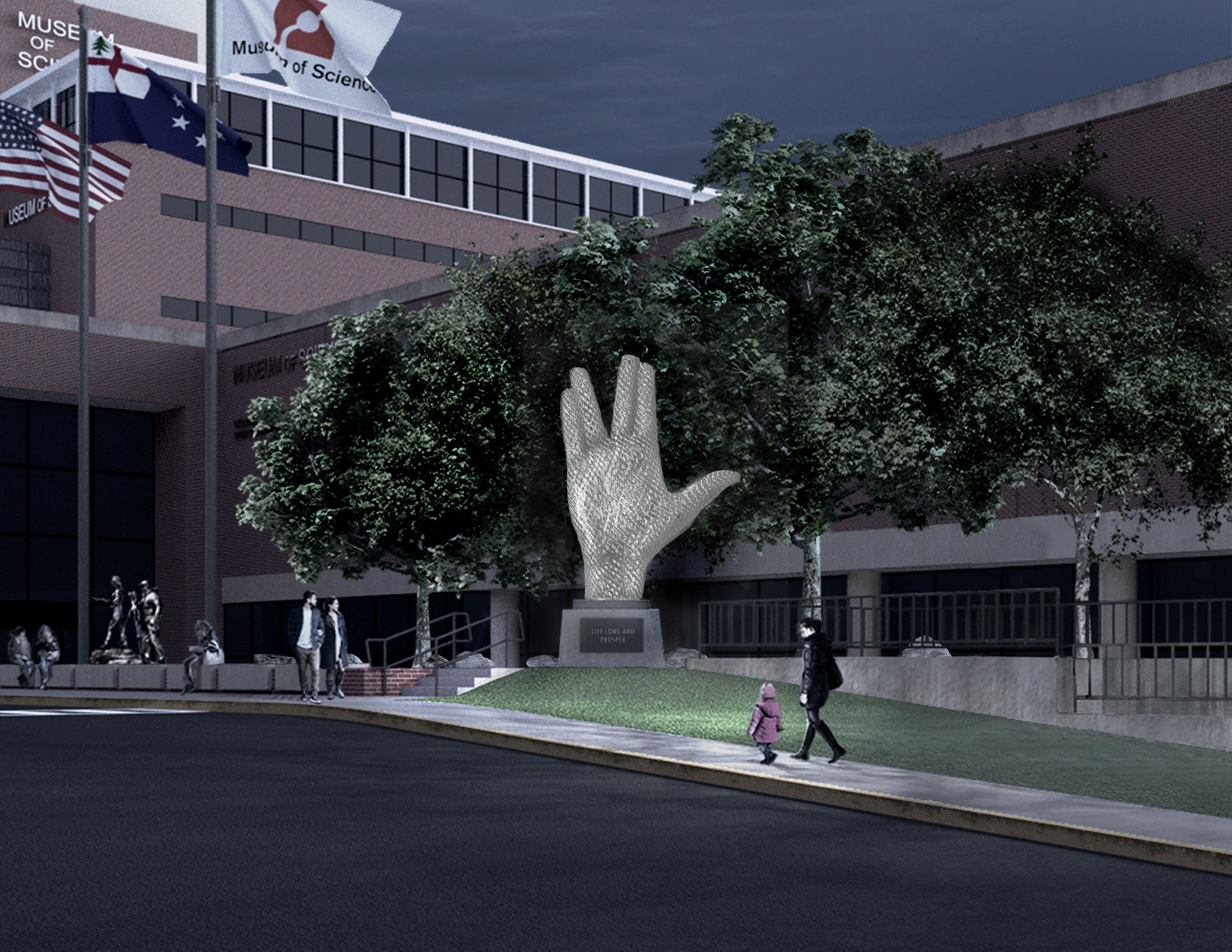 BOSTON, MA — The Museum of Science, Boston, one of the world’s largest science centers and one of Boston’s most popular attractions, in collaboration with the family of Leonard Nimoy, legendary actor of the historic television series, Star Trek, today, announced the development of a monument honoring the Boston native to be located at the Museum of Science.

The 20-foot, illuminated, stainless steel monument, designed by artist David Phillips, will be shaped in the famous “Live Long and Prosper” hand gesture that the actor’s character Mister Spock was known for. It will be located in front of the Museum, at Science Park, welcoming visitors and Star Trek fans from around the world.

“The “Live Long and Prosper” symbol represents a message that my dad believed so strongly in,” said Julie Nimoy, daughter of the entertainer. “My dad always loved Boston and he would be honored knowing that the Museum of Science would be the permanent home to this memorial.  The sculpture not only depicts one of the world’s most recognized and loved gestures for peace, tolerance, and diversity, but it will also be a beautiful tribute to my dad’s life and legacy.”

Leonard Nimoy’s career spanned over 60 years as an award-winning actor, director, producer, writer, recording artist and photographer. He is one of Hollywood's most recognized and loved entertainers. Born in the West End of Boston, just blocks from where the Museum of Science is now located, Nimoy’s values for unity and tolerance, stemmed from his early days growing up in Boston.

The idea for the Live Long and Prosper hand gesture as the Vulcan greeting, originated from Nimoy himself, who was inspired by an ancient blessing he saw growing up in his synagogue. Later, in the 1980’s Nimoy collaborated with the Museum of Science as the recognizable voice of the introduction film of the Mugar Omni Theater which continues to welcome millions of audience members for more than 30 years.

“Leonard Nimoy was one of our own. Growing up a few blocks from the Museum of Science, he never forgot his immigrant roots. He was, and forever will be, a beloved part of our Museum family,” says Tim Ritchie president of the Museum of Science. “He lifted our aspirations and hopes through his commitment to science, intellectual curiosity, generosity, and, yes, logic.  He reminded us about the best part of humanity and gave us a vision for building a society based on reason and tolerance. The opportunity to pay tribute to him is a great honor and what better day to make this announcement than on what would have been his 90th birthday.”

The Museum of Science and the Family of Leonard Nimoy will collaborate on the next phases of development of the Leonard Nimoy memorial sculpture which will include finalizing site plan, fundraising, and construction. Those interested in donating to the memorial fund can visit mos.org/Nimoy.