Our garage elevator is currently out of service. We apologize for the disruption.
For assistance, please call 617-723-2500 and someone will direct you.
The Blue Wing will be closing at 5pm on Friday January 27, and February 3.
Tickets 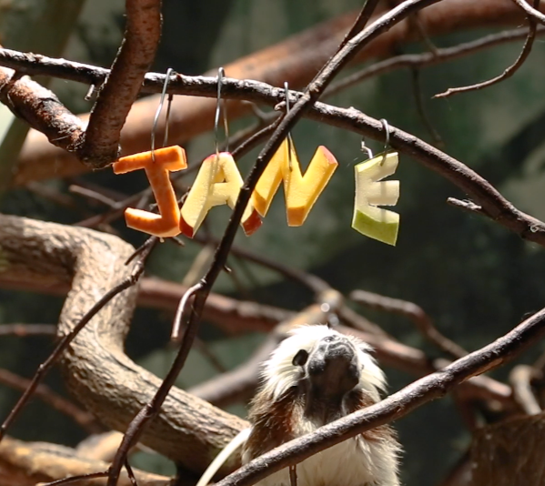 BOSTON, MA  — After thousands of ballots were submitted and counted,  the Museum of Science, Boston today announced the results of the public vote to name its new cotton-top tamarin.  With a sizeable majority, the Museum revealed that the public has selected Jane, after famed primatologist Jane Goodall as the tamarin’s new name.

The Museum revealed the tamarin’s name today in a video showing Jane enjoying her new enclosure and tasty treat.

Jane came to the Museum last month from the Ellen Trout Zoo in Lufkin, Texas where she was born.  Located in the Hall of Human Life at the Museum, she will become an animal ambassador, offering visitors opportunities to learn about the fascinating abilities of these clever primates. It is also hoped that she and the Museum’s male cotton-top tamarin, Darwin, will hit it off as mates, as part of the national Species Survival Plan® program to ensure the survival of this endangered species. As a member of the Species Survival Plan® program, the Museum collaborates with institutions across the country to breed genetically healthy captive populations of tamarins here in the United States, and to save the wild habitat in their native Colombia.

The Museum of Science, Boston is an Association of Zoos and Aquariums (AZA) accredited institution. The Museum’s Live Animal Care Center is home to approximately 120 animals, representing more than 50 species that illustrate the value and importance of animals, the impact humans have on their habitats, and the struggle for species to survive.

Visitors can visit Jane and Darwin in the Hall of Human Life at the Museum of Science.