A Man of Science 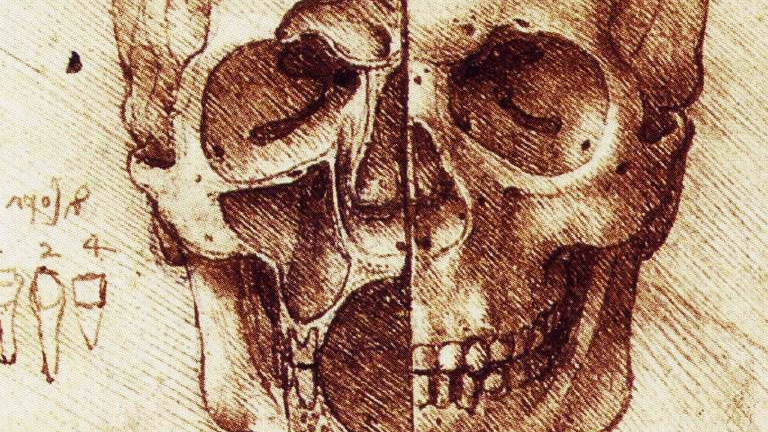 Leonardo's work bridged the gap between unscientific medieval methods and our own modern approach. His experiments in anatomy and the study of fluids, for example, were beyond the accomplishments of his predecessors. Beginning with his first stay in Milan and accelerating around 1505, Leonardo became more and more wrapped up in his scientific investigations.

The range of topics that came under his inquiry is extensive: anatomy, zoology, botany, geology, optics, aerodynamics and hydrodynamics among others.

While greatly influenced by the writings of the ancient Greeks and Romans, Leonardo, unlike many of his contemporaries, saw the limitations of seeking the truth solely in those writings or the Bible. Instead, he took the approach of actually observing nature and asking deceptively simple scientific questions like, "How do birds fly?" He then systematically recorded their solutions in his sketches.

Leonardo had the unique ability to observe nature and record it. His determination to record those details sometimes led him to work in difficult conditions. The first biographer of Leonardo da Vinci, Paolo Giovi, wrote in 1520: "in the medical faculty he learned to dissect the cadavers of criminals under inhuman, disgusting conditions...because he wanted [to examine and] to draw the different deflections and reflections of limbs and their dependence upon the nerves and the joints. This is why he paid attention to the forms of even very small organs, capillaries and hidden parts of the skeleton."

In a study of cervical vertebra shown from different perspectives, Leonardo notes: "[Both] former and contemporary authors have produced written reports [about anatomy] in tormentingly long-winded and confused styles. However, through a concise portrayal from different perspectives, things are described definitively; and to avoid that my gift to mankind could be lost [to time], I teach the technique of reproducing things by printing." These remarks heralded the birth of a new method of scientific study: the systematic, descriptive method of the natural sciences, which was the predominant method of scientific study well into the 19th century.

As his curiosity took him in ever wilder directions, Leonardo always used this method of scientific inquiry: close observation, repeated testing of the observation, precise illustration of the subject object or phenomenon with brief explanatory notes. The result was volumes of remarkable notes on a variety of topics, from the nature of the sun, moon, and stars to the formation of fossils and, perhaps most notably, the mysteries of flight.